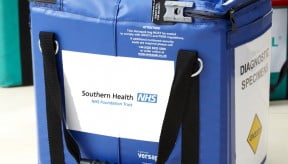 Southern Health NHS Foundation Trust (SHFT) was formed when Hampshire Partnership NHS FT and Hampshire Community Healthcare Trust merged together in April 2011. As a result, the number of duplicated non-patient courier routes served by several in-house and private providers increased. In addition, many of these routes were inherited and serviced by vehicles that were several years’ old (some in excess of 20 years’ old) and very carbon and fuel inefficient.

It was no surprise then that SHFT wanted to demonstrate pioneering leadership towards significant reductions in carbon emissions, effective communication of bold methods and a vertical implementation of best practice throughout the organisation. And they achieved this by working with ERS Medical who now looks after the Trust’s mail and courier requirements. ERS Medical optimised routes to result in a 39 decrease in the Trust’s overall mileage and a 47 decrease in the Trust’s carbon emissions.