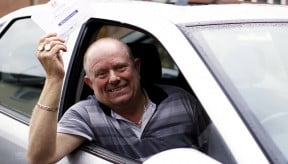 ERS Medical would like to congratulate Tony Gowing, who has been awarded a British Citizen Award for his years of dedicated service to the community.

Tony Gowing is a voluntary driver for the Car Link Scheme, in which he has transported hundreds of patients to their hospital appointments over the past 16 years. Since taking over the non-emergency patient transport contract in Norfolk, ERS Medical has been working in partnership with Voluntary Norfolk to run the scheme that sees volunteers providing transport to more than 100 patients every day across Norfolk.

Tony joined the scheme as he wanted to “give something back” to the NHS which helped rebuild his life following a horrendous attack 20 years ago which left tony with seriously injuries and deeply traumatised. During his three-year recovery he relied heavily on the health service and also the vital patient transportation service which got him to and from his numerous medical and counselling appointments.

In recognition for Tony’s continued service to the local community he is one of 33 people nationwide to have been chosen as the UK’s top citizens and has been invited to travel to the Houses of Parliament to receive his award later this month.

Thank you and congratulations Tony on this great achievement!