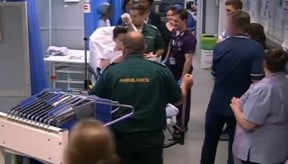 ERS Medical has made a cameo appearance in the latest series of Channel 4’s 24 Hours in A&E.

Rob Etall and Scott Grant, from ERS Medical’s site in Surbiton, featured on the program as they transported a 10-year-old boy named Joshua to St George’s Hospital.

Joshua had severed his little finger on a metal fence. Rob and Scott did a brilliant job handing the patient over to the medical team in the hospital and luckily, Joshua’s finger was saved.

Well done to Rob and Scott and keep an eye out for the ERS Medical team in future episodes!