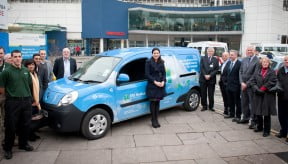 The van will operate in Liverpool transporting specimens, medical records and equipment between the Royal Liverpool and Broadgreen University Hospital. It is the first time that a roadworthy van, powered entirely by electricity, has been used in the NHS and provides a cheaper, more sustainable alternative to the traditional combustion engine vehicle.

The electricity for the van is supplied by the Trust’s energy partner Dalkia at a charging point at the Royal. The van can travel up to 100 miles before it needs recharging and has a top speed of 81 miles per hour. The Trust expects the van will travel around 300 miles per week; with zero CO₂ emissions and costs of around 3 pence a mile, hence far cheaper to run than petrol or diesel fuelled vehicles.

ERS Medical commented: “Sustainability is high on our agenda for the future. We’re always looking for ways to innovate our services to the NHS and this investment is an exciting one for us. We envisage this electric van to be the first of many zero-emissions vehicles to be added to our fleet.”

At the launch event, Luciana Berger MP, said: “I want to congratulate all the staff at the Royal and their partners who have worked hard on this fantastic initiative. It’s great that during Climate Week the NHS in Liverpool is leading the way in cutting damaging carbon emissions and safeguarding the future of our planet. I hope that this electric van will be the first of many and that more hospitals across the North West follow The Royal’s example.”

Andy Johnson, Energy Manager at the Trust, said: “This is a great step forward in supporting better sustainability and carbon reduction in the NHS, as well as helping to improve local air quality. The van is charged using electricity generated onsite and we expect this zero carbon vehicle will be start of a wider initiative.”
Mike Hooper, Regional Director at Dalkia, said: “This is an excellent initiative and a good way of further enhancing the use of the low carbon electricity generated by the hospital’s combined heat and power plant. It’s a big commitment for Dalkia to help the Trust reduce its overall carbon footprint. We look forward to working together going forward.”

Climate Week is Britain’s biggest climate change campaign. Each year, half a million people attend 3,000 events across Britain run by schools, businesses, charities, councils and many others to highlight the need for a sustainable future.