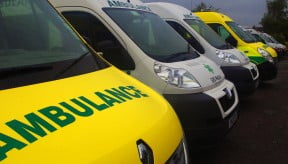 ERS Medical provided vital support in Great Yarmouth, Norfolk, as eight thousand homes were evacuated ahead of the floods hitting the East of England.

High tides and strong winds threatened to swamp the coastline in what was feared to be the worst tidal surge for more than 60 years. ERS Medical provided four ambulance crews and vehicles to assist in moving some local residents and patients to safety.

The multi-functional fleet of ambulances assigned to carry out the work by ERS Medical allowed a number of patients to be transported at a time. Extra Police, Army and Firefighters were drafted in and ERS Medical crews helped alleviate the pressures by providing patient transport services allowing the EEAST to concentrate on using their frontline crews for medical emergencies.

Dawn Newman, Lead Nurse for NHS Continuing Healthcare NHSGYWCCG, expressed her thanks to ERS Medical, she said: “My most grateful thanks for the assistance that you gave last week to maximise the safety of vulnerable patients during the predicted tidal surge. Your enthusiasm and willingness to help was most gratefully received. Your input was a vital part of the operation put in place. NHSGYWCCG look forward to working with you in the future.”

ERS Medical said: “Our crew members came in to work at the drop of a hat as they wanted to help their local community in any way they could. Many of our crews that day worked late and our office staff stayed on to help co-ordinate further crews to offer to EEAST. We were able to respond to EEAST’s needs quickly and efficiently in an emergency scenario and offer a flexible solution to help local residents.”

The Environment Agency issued three severe flood warnings for parts of Great Yarmouth – the highest category, warning of danger to life. Down the east coast the agency also issued 26 flood warnings, stretching along the Suffolk, Essex and Kent coastlines.