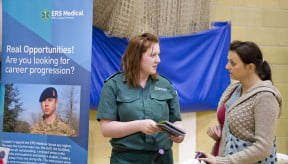 From the Forces to the Medical Field

Through its continued support of the British Forces Resettlement Services (BFRS), ERS Medical has attended the organisation’s latest careers fair. The flagship event in Tidworth, had over 1000 jobs being advertised and offered a variety of possibilities to someone making the transition from military to civilian life. These included employment, training, networking and support opportunities for Armed Forces personnel during all stages of their resettlement process and beyond.

ERS Medical gave a talk to attendees titled ‘From the Forces to the Medical Field’. The talk covered the range of training courses along with employment opportunities that ERS Medical offers for real career progression within the medical sector. As many ex-forces personnel leave with medical qualifications gained through their military service the presentation looked at different scenarios in progressing up the medical career ladder.

As a business, ERS Medical is passionate about not only enriching learners with key skills through medical courses but also providing employment, where possible, following qualification. A large majority of ERS Medical course students remain with the company joining the 520 staff nationwide including paramedics, technicians and nurses.

BFRS is a non-profit Community Interest Company working in the interests of the forces community. With 14,000 members, BFRS has created an armed forces network offering support to the forces community and their families during the transition process and for the rest of their careers.