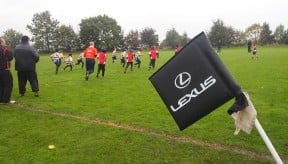 ERS Medical was proud to provide medical cover for the kick off of the Lexus Junior Rugby 2013/14 Tournament. The first of six regional tournaments took place at Old Brodleians RUFC, in Halifax, and ERS Medical crews were on hand. The match saw the Under 7s and 8s from Sheffield and the Under 9s and 10s from Hull conquer the weather to secure their place in the national final.

ERS Medical said: “We were proud to be involved in this prestigious and very well organised event. The teams played well despite the harsh weather conditions and fortunately our crews only had to deal with very minor injuries.”

Teams from seven clubs in the North and Mid East of England will take to the pitch and battle it out over the coming months to become the regional champions qualifying for the national final of the Lexus Junior Rugby tournament in May 2014.