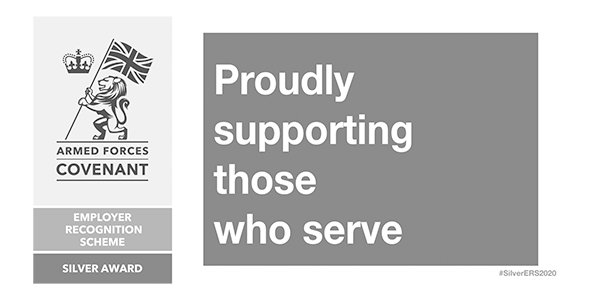 We are very proud to have been granted the Ministry of Defence ‘Employer Recognition Scheme’ Silver Award. This award recognises employers that have signed the Armed Forces Covenant and have gone above and beyond in supporting defence personnel.

Supporting the armed forces is a big part of our culture at ERS Medical. We’ve signed the Armed Forces Covenant, which is a promise by the nation ensuring that those who serve or who have served in the armed forces, and their families, are treated fairly. We’re a forces friendly employer with team members who are currently, or were previously, members of the armed forces. This includes our managing director, head of care standards and head of operations. We welcome job applications from the armed forces community and we are committed to providing a supportive career environment.

If you’re interested in a career with ERS Medical, our current vacancies are always available to view online, as well as further information about the Armed Forces Covenant.