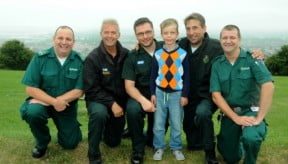 Southampton crew save child during their lunch break

Paul Snow and Karl Touhey from our Southampton base were on their lunch break at Portsdown Hill, when they saw Jacob Smith (a seven year old child) fall and hit his head on a bench. They sprang into action to help the youngster when he was knocked unconscious and started to go into shock.

Describing the drama, the child’s mother, Hayley Smith, said: “We came here for our lunch and Jacob was running around then all of a sudden he tripped. He went straight into the bench and hit his head. He ended up on the floor and couldn’t get himself up. I picked him up and he was like jelly. I sat him up on the bench and he was sick three times. He couldn’t keep his eyes open.”

Paul said: “When I first saw Jacob I was quite concerned for him, he was pale, floppy and not responding. Also that he had vomited – all the red flags for a serious head injury. I knew that he needed our help immediately and that we had to get him to hospital.”

By pure chance, an ambulance was parked behind as another two SCAS paramedics, were taking part in a driver training course. Jacob was taken by the ambulance to the Queen Alexandra Hospital. It took 30 minutes for him to regain consciousness and a further four days for him to feel well again. Speaking about the paramedics, Jacob said: “Thank you. They are superstars.”