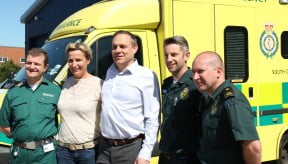 ‘Thank you for saving my life’

Matt Tanner, 43, was at home in January with family and friends and looking forward to watching football when he had a cardiac arrest.

Luckily, Matt’s wife Kelly knew the importance of early and effective bystander CPR so she started compressions while friends phoned 999.

On scene, the crews worked together quickly and efficiently, each carrying out vital roles to save Matt’s life. Matt was given adrenalin to restart his heart and shocked twice with a defibrillator. The crews continued treating Matt as they were conveying him to Queen Alexandra Hospital in Cosham. Matt was sedated until late the next day and when he woke, he didn’t have any memory of the incident.

Matt and Kelly visited North Harbour Resource Centre on 22 April to be reunited with the teams and to express their thanks for all their help that day.

Matt said, “I cannot stress how eternally grateful I am for my wife’s quick response with CPR, and the critical work the paramedics carried out. My chances of survival were less than 2, so it was very emotional to meet the SCAS heroes at North Harbour Resource Centre.”

Kelly admitted, “When the Clinical team arrived, there was total chaos at the house, but they were so calm and efficient and brought Matt back to life. Thank you guys.”